“You can't have butterflies if you keep killing all the caterpillars." – Kristen Messenger, Environmental Educator

In the age of pesticides, bug sprays and anti-microbial wipes, little critters might make your skin crawl. But there’s no denying that insects are critical to the balance of all life on earth... including in your garden.

The concept of ‘pests’

If you go hiking in the forest and bumble through a spider web or get stung by an insect or two, it can be irritating (and uncomfortable) but are you ever that surprised?

We know that spiders keep insect populations in check, and without them, our world would be overrun with smaller bugs. The bugs feed fish, amphibians and reptiles, who feed bears and other predators. Predators keep grazing animals like deer culled to healthy populations, and grazing animals strip forests to encourage new growth.

So if the circle of life is nothing new to us when we journey into the great outdoors, why do we always get a surprise when it lands on our doorstep? Our garden soil is filled with billions of invisible microbes, and while there’s life we can’t see in our garden patch, there’s also plenty we can see – and some of us don’t like what we find.

Insects, spiders, land crustaceans, larvae and more are all naturally found in the soil. They’re a vital part of healthy soil, aerating the soil as they tunnel around and kick up a fuss, which boosts microbial activity. When they die, they feed the soil, almost like little dots of fertiliser.

When is a pest actually a pest?

Weeds are pretty much plants we’ve decided we just don’t like (for one generally valid reason or another) and in the same vein, pests are insects we’ve decided we don’t like. But the problem is that a lot of people dislike all insects, not just the ones that eat their crops.

It’s true that bears can wreak havoc in neighbourhoods and a deer can strip your garden beds clean within minutes, but they’re only considered pests in the ‘wrong environment’. So why do we think differently about insects and spiders?

If you want a healthy, balanced garden you’re going to have to learn to pick your battles. If your plants are healthy, happy and relatively free from nibbles, the insects in your garden probably aren’t anything to worry about. It’s only when the balance of your garden gets upended that you need to take action.

The same can be said for your compost pile! Subpod is a ‘pest-free’ compost system, but that doesn’t mean insect-free. It’s rodent-proof, so rats, mice and raccoons won’t be attracted to your garden and home (and they won’t be able to break into your compost).

But the insects that live in the soil of your garden will still be able to explore the compost inside. They actually help speed up the composting process! You might not like them helping out, and you don’t want them taking over the system, but in small amounts, they’re friends, not foes.

How to work with nature to remove pests

Rather than spending hundreds of dollars on toxic pesticides that ruin the quality of your soil, you can actually introduce native insect species into your patch to keep insects in check.

In this video from the ABC, Kristen Messenger introduces native Australian praying mantis’ into a garden to keep populations of flying insects down. The praying mantis is a carnivore, so instead of eating the plants, it protects them! 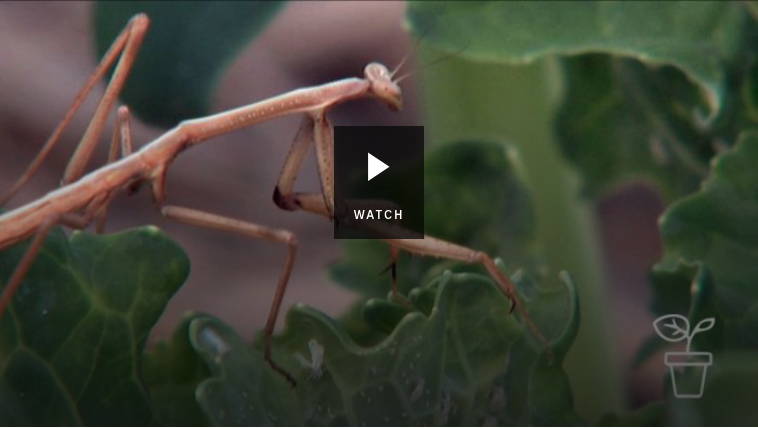 Encouraging frogs and carnivorous insects in the garden is a part of a method called Integrated Pest Management (or IPM).

You can also take a more direct approach, especially in your compost. If you notice high populations of slugs, larvae, ants or other species you’re not fond of, you can put on gloves and remove them by hand, or change the conditions in your system to encourage them to move along.

Peter Critch demonstrates how to rebalance a compost system to encourage insects to move along.

At the end of the day, insect activity in your garden is something to be celebrated, not feared. Bugs, worms and spiders in your soil is a natural sign that it’s healthy and fertile!

So if your plants are happy and your compost is breaking down, take a deep breath and ask yourself if that bug you’re looking at is really a pest – or just an unexpected guest.